Mark Hatchard started working with music festivals in either 1990 or 1992...he was quite young and hadn't yet become obsessed with exact times and dates so isn't 100% sure. As you can see we managed to get a copy of Mark's 1994 Reading Festival pass so we at least know he was at Reading at some point in the early 90s!

Back then Mark was working for DC Site Services Ltd. Mark's first job was looking after Reading Festival's left luggage cabin - this where festival goers could leave their belongings whilst they popped off to the arena for a boogie. Now, whether it was Mark's disappointment that the powers that be hadn't realised he had the potential to run the show, or merely Mark's lifelong love of the Castoroides ohioensis that influenced his management of this cabin, we'll never know. What we do know is that his method for looking after the public's precious belongings was to:

Now, this method of course resulted in probably the most disorganised pile of random stuff one might imagine. Fortunately when festival goers returned, ticket in hand, for their valued personal belongings, Mark had a tried and tested method of locating said items; dive into the pile headfirst and dig about, randomly holding up items until he heard a noise which resembled a festival goer happily recognising their stuff...or they got fed up and left in the hope that on returning a proper big person would be there to assist.

Mark was never asked to look after anyone's luggage ever again... 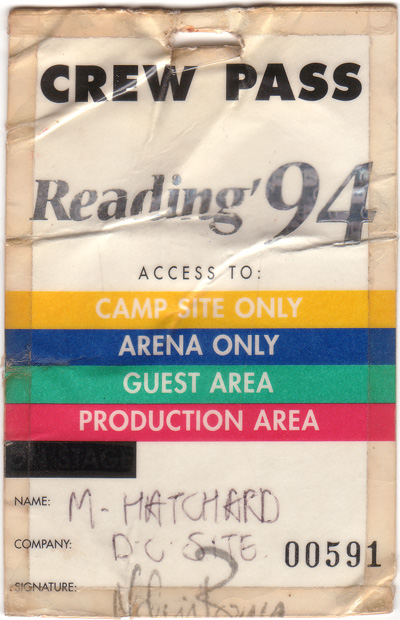 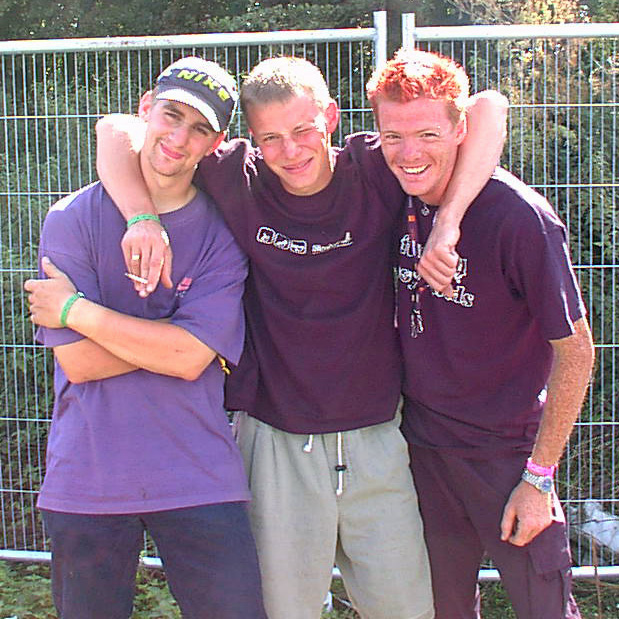 Fortunately, from here on Mark managed to become a little more useful in the music festival world. Throughout the 90s and until 2002 Mark continued to work for DCSS. Initially at Womad and Reading Festival although on heading to college and later university Mark worked between five to twenty festivals throughout the summer months.

Mark's work with DCSS until 2002 mostly consisted of supervising on-site teams ranging from ten to over a hundred staff, and managing the company's online presence. In 2002 Dick Collins (Director of DC Site Services) asked Mark to manage the company's team at Glastonbury Festival - an event that DC Site Services hadn't staffed for over a decade. It was at Glastonbury 2002 that Mark first met Harmony Blake (Deputy Licensee of Festival Republic's (formerly Mean Fiddler) Latitude Festival and Leeds Festival and assistant to Melvin Benn).

Now, as far as the Reading Festival and Leeds Festival weekend goes - Reading Festival is the show with the long history, thus many of the staff, including Mark, had grown up with it being a big part of their life. When Leeds Festival was started in 1999 the call came for staff to head up to Yorkshire. Mark didn't fancy it - especially as at that time Mark lived less than 10 miles from the Reading Festival site! Following Leeds 2002 many became aware that as much as they loved Reading Festival their experience could be put to better use up in Yorkshire. Amongst others Mark was planned to head up to Leeds Festival in 2003. A few weeks prior to the festival Harmony Blake was looking for someone to supervise (or as Harmony put it "super supervise") a small team of volunteers. Dick Collins, Fiona Ingram (Festival Republic's Reading Festival Campsite Manager and Glastonbury Festival live-in vehicle manager) and Dave Ingram (Festival Republic's Leeds Festival and Latitude Festival Campsite Manager and Glastonbury Festival live-in vehicle manager) all suggested Mark was the man for the job...potentially wearing tight Lycra pants whilst he was at it. This was the start of Hotbox Events... 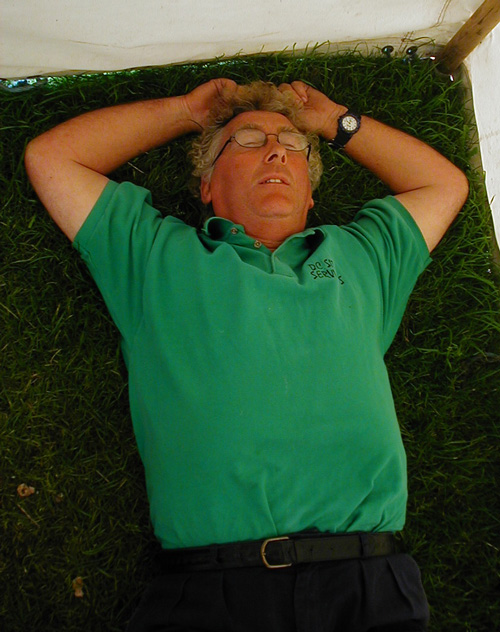 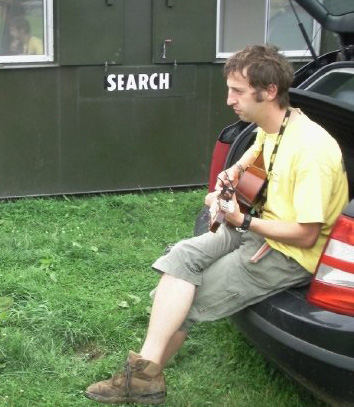 The volunteers Harmony asked Mark to supervise, all seven of them, were brought in to assist in the campsites - hence the title 'Campsite Assistance Teams' or CATs...took a long time to think that one up. Leeds Festival 2003 was a very long albeit very successful couple of weeks. Mark was working for DCSS - managing the night shift, working into the days as required and supervising Festival Republic's new CAT volunteers.

Tavis Russell was one of 2003's volunteers and proved to be a huge help...even if often a little infuriated by the "Festival 5 minute rule". Tavis now fully understands that on a festival site 5 minutes often means 30 minutes, an hour, or even two hours, and has proven himself highly proficient in implementing this rule...

Following the success of Leeds 2003 Harmony asked Mark to further develop the CAT volunteer project with Festival Republic and Dave Ingram asked Mark to become the Leeds Festival Deputy Campsite Manager. Following discussions with Dick Collins - Mark accepted both positions...thanking his lucky stars everyone had seemed to have forgotten the Reading Festival left luggage incident from the early 90s...

From here the CATs went from strength to strength...

The numbers and quality of service quickly increased at the Leeds Festival - Harmony working tirelessly in developing the project with Mark. 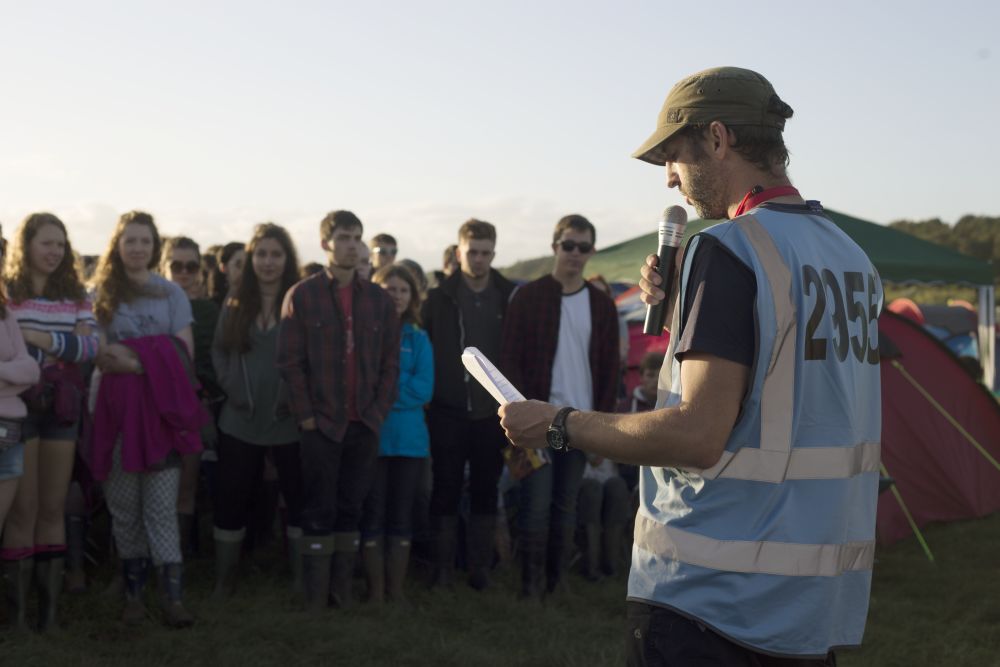 Reading Festival 2015 - Tavis finally gave a briefing without a guitar! 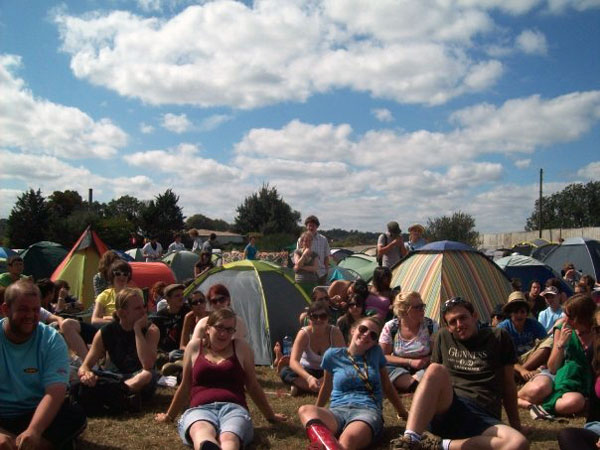 On Fiona Ingram's recommendation - Reading Festival's Nicky Hodgson contacted Mark in 2006. With Nicky's support the CATs were successfully introduced to Reading Festival that same year. Tavis Russell, Dominic and Jerilyn Lowry headed down to Reading to supervise the new team. Edd - having worked at Reading Festival since 1996 with DCSS - took on the responsibility of overseeing the CAT operation at Reading.

With the loss of Tavis to Reading Festival - Jo Shields stepped up to run the volunteers at Leeds Festival, with the assistance of Steph Newman and Adam Hollis. Jo has proved herself to be an invaluable member of the team - one of the only people who sleeps as little as Mark!

The CATs headed to Latitude Festival in 2008 under the watchful eye of Steph Newman, assisted by Jo and Tavis. Steph well known for giving some of the best (and soggiest!) briefings in the festival world...

Steph, Jo and Tavis have been instrumental in the expansion of the CATs and do far more than just manage the staff and volunteers onsite - Hotbox Events is a year-round (part-time) job for them all. Much of their time is spent dealing with queries from potential volunteers, keeping track of applications, interviewing staff, preparing briefing packs, rotas, reports and seemingly hundreds of spreadsheets...Rock and Roll...

Talking Rock and Roll we shouldn't forget Rob Smith! Rob is a director of Hotbox Events and if it's an update to the website, new functionality for the PAAM Event Software, payment query or anything else we can even tenuously relate to the online side of Hotbox Events - Rob is there to help/blame! 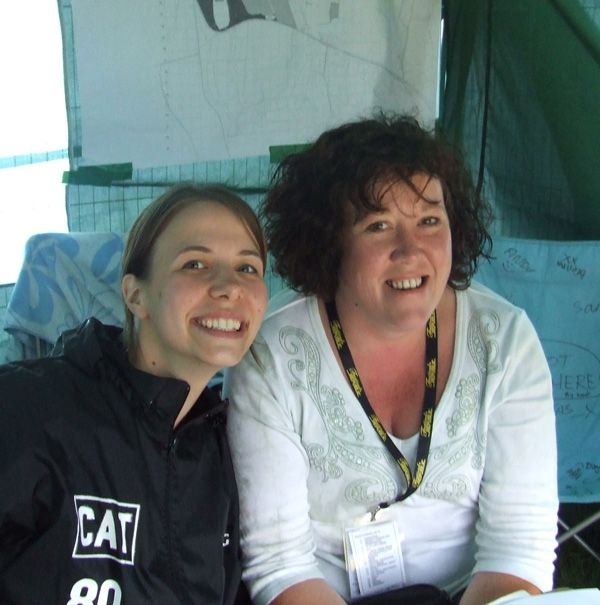 Last but by no means least - although we've already mentioned Edd he deserves an entire paragraph to himself! Edd not only manages the Reading CATs but also works closely with Hotbox Events year-round - if it's a server, a network, a firewall, a VPN connection - Edd has been there. If it wasn't for Edd...well, the typewriter wouldn't be so lonely.

All this is very interesting we hear you say but let's try and get back on track - where did 'Hotbox Events' come from?

There have been many more involved than just those mentioned above - a huge thank you must go to all the volunteers and staff that have worked with us on-site - without your enthusiasm and dedication Hotbox Events wouldn't be where it is today!

We hope this explains a little of Hotbox Events' history although any queries please get in touch!